Is Block Puzzle a reimagined version of Tetris? Here’s everything you are dying to know 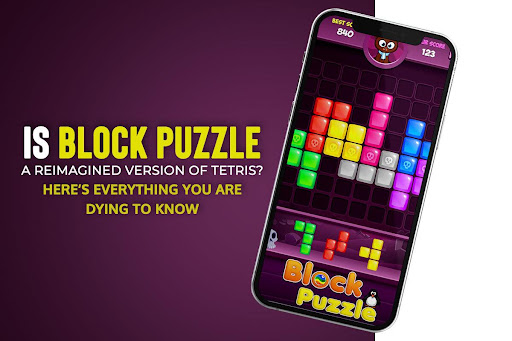 You have had a fantastic childhood if you remember playing Tetris on your PC. The game was brought into life unintentionally by Alexey Pajitnov. While testing Electronika 60 (a new type of computer), Alexey wrote a simple game based on a puzzle he had played as a child. The game was meant to assess the computer’s power while providing a dash of entertainment.

To his utter surprise, the game he accidentally designed created a storm and became one of the most popular and addictive games. Even the Gen Zers have heard of Tetris, proving the game’s continued success.

However, the reason why Gen Zers are aware of Tetris is because of the Block Puzzle game. Wondering why? Continue reading to know the answer.

It wouldn’t be exaggerating to say that Block Puzzle is a reimagined version of Tetris. The reasons for this are:

How is the Block Puzzle game different from Tetris?

The Block Puzzle game takes after Tetris, but it has unique twists to appeal to the modern crowd. For instance, it is a multiplayer game where you can compete against real-life online players. You can engage in 1V1 intense battles with online players of varying skills. Also, you can implement a few strategies to increase your chances of getting high score in Block Puzzle. Some of the strategies are starting the game by placing the block pieces on the corner of the grid, leaving space for the 3X3 square piece, focusing on clearing multiple vertical and horizontal lines, etc.

Apart from the game’s multiplayer aspect, there are several other changes. Some of them are given below.

So, if you miss playing Tetris, you can consider downloading the Block Puzzle game application and installing it on your device. The game requires you to create an account, or you can sign in using your Apple, Facebook, or Google account. Once you have created an account, you can play the game with a single tap. Either choose to play practice free games with online players or participate in tournaments to win cash rewards.

The game includes an element of luck, and you should start praying the square piece doesn’t appear at a time when there’s no space on the game board. Other than this, winning a match is dependent on your strategies and placement of the block pieces. It would be best to carefully place the pieces to clear multiple lines at once, and you can score the highest.

If you want to try your hand at the reimagined version of your childhood’s favorite game, you’ve already wasted a lot of time. Your friends are already having a blast. Install and have fun!

A social media guru with the latest tools in every situation and an expert at knowing how to use them, follow this woman because she's always posting great content for your viewing pleasure--whether it be about travel or alcohol consumption (or both!).

View all posts by Anshu Dev
Leave a comment